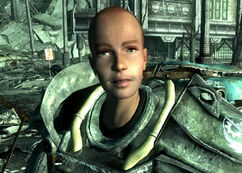 Reddin without her power armor helmet

“You don't need to worry. We're the best outfit in the whole Brotherhood of Steel. Just watch what we do to these Uglies.”

Initiate Reddin is an initiate within the elite Lyons' Pride of the Brotherhood of Steel in 2277.

A wastelander who was only recently conscripted into the Brotherhood,[1] Initiate Reddin is an overly curious and excitable recruit on her first combat assignment. Vargas does what he can to restrain her and teach her the ways of the Brotherhood. Reddin was added to Sarah's unit against his advice, but although Vargas may act angry and annoyed at Reddin, it is entirely because he is trying to keep her alive.[2]

Initiate Reddin appears only in Fallout 3.

In the game files, Reddin's script is called "MQ01RedshirtScript", a reference to the disposable "redshirts" of the Star Trek original series.

Retrieved from "https://fallout.fandom.com/wiki/Reddin?oldid=3326633"
Community content is available under CC-BY-SA unless otherwise noted.