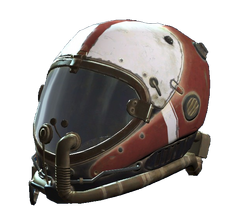 The red flight helmet is a piece of headwear in Fallout 4.

It provides a Damage Resistance of 2 and an Energy Resistance of 5. It is fairly rare compared to the yellow flight helmet variant. It takes up all available equipment spaces on the head, preventing anything else from being worn.