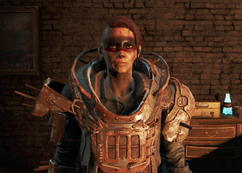 Red Tourette is a raider living in the tunnels of the Federal ration stockpile in 2287.

Red Tourette had a sister named Lily who was kidnapped by another group of raiders led by Tower Tom and brought to the Beantown Brewery, ultimately being killed by them. Red and her group of raiders are under the impression that her sister is still alive as determined by Red's personal terminal and that the food they are sending them is keeping her alive.

Red begins to have doubts about the wellness of her sister and begins to send members of her own group to spy and infiltrate the brewery. She believed Lily to have escaped when her spies returned with no sight of her, with no idea that Lily has been killed. If the Sole Survivor has already cleared the raiders in the Beantown Brewery, the log also contains a story of how the raiders were slaughtered, but "luckily, she [Lily] was nowhere to be seen." This also works the other way having extra terminal options at Beantown Brewery if one has already cleared the Federal ration stockpile.

Red Tourette appears only in Fallout 4.

If Red is not killed, the enemies at the stockpile will continually respawn every in-game week.

Retrieved from "https://fallout.fandom.com/wiki/Red_Tourette?oldid=3247952"
Community content is available under CC-BY-SA unless otherwise noted.