The Red Rocket Collectron station is is a resource-gathering workshop object in Fallout 76, introduced in the Steel Reign update during the sixth season.

When built, this station will produce the Red Rocket Collectron.

The item is found under Resources in the workshop crafting menu. Crafting is unlocked after reaching rank 99 of the sixth season or by learning the plan.

A Red Rocket Collectron station may be built at claimed public workshops or at a player character's C.A.M.P. after being unlocked or learning the plan. 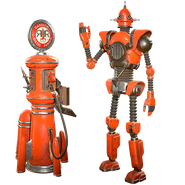