Play sound
Acolytes of the New God Cathedra…
“We make the happy stuff. What do you need? Jet, Psycho, a little Med-X to ease the pain?

The Red Rock drug lab is a location in the Mojave Wasteland in 2281, located in Red Rock Canyon. It is the base of operations for the Great Khans' drug business.

The Red Rock drug lab consists of five trailers along the bottom of a cliff. There is a campfire surrounded by a seating area. It is found by following a path just slightly northeast of the arena. 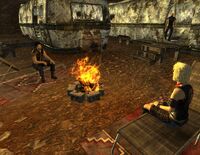 Jack and Diane near a campfire 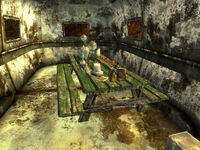 The "lab", with two skill magazines