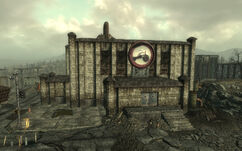 “Get the formula and meet us at the Red Rocket [sic] Tricycle Factory as we planned. Our buyer is promising lots of caps, so I want to see some hustle! This could take our gang to the big time. Sudden-Death Overtime forever.”— Goalie Ledoux's orders to Winger Mercier

The Red Racer factory is a pre-War Red Racer tricycle factory on the outskirts of southwestern Washington, D.C., northeast of the Nuka-Cola plant and south-southwest of Grayditch in the Capital Wasteland. The medium-sized building is inhabited by feral ghouls, a human, and super mutants, and has two interior sections.

The factory's door faces east, toward a partially enclosed parking lot. There's a loading dock on the south side of the building where an overturned container of irradiated barrels has spilled into another parking lot below. A few raiders occupy the area; expect to see one to the east on the upper parking lot and a couple in the lower southern parking lot any time the Lone Wanderer travels here.

If the player character has already visited the Nuka-Cola plant, they can interact with a trio of raiders called the Sudden-Death Overtime Gang. This is part of the unmarked quest Just for the Taste of It. An alley between the buildings across the parking lot to the east is the site of what appears to be a raiders-only shop with some decent loot. There are also some skill books at the scavenger's bridge to the north, but they must be stolen.

With Operation: Anchorage installed, the entrance to Bailey's Crossroads Metro is a short walk to the southeast.

This area is a fairly complex maze of assembly lines and catwalks, with a few scattered offices and a large number of toolboxes, workbenches and components for crafted items. The quickest route through is to follow the hall west from the entrance, keep moving west and north until the player character can go up a stairway, then head through the covered passage southwest directly to the CEO offices' door. Careful exploration will uncover two safes and two well-hidden skill books. One safe is located in an office full of cubicles directly west from the entrance. The other can be found in the easternmost room, on the north side of the complex, on the highest level of catwalks, also in an office full of cubicles. Both safes have Easy locks.

Feral ghouls are found throughout, and high level characters with the Broken Steel add-on will encounter a number of powerful feral ghoul reavers. Each time the player character kills one of these ghouls, they'll emit an electronic "chirp" similar to a mine prior to exploding. The head of the dead ghoul will then burst if it has not already been destroyed.

The office section is smaller and more straightforward, and is protected by several super mutants (up to masters depending on level) with the same head-bursting effect as the ghouls. Characters with the ability to hack (Average) computer terminals will be able to find information on this phenomenon, and the terminal closest to the entrance has the option to "Disable Chips," killing any remaining super mutants and ghouls except the caged ghoul Stefan.

The Surgeon, a mad scientist armed with a missile launcher, is responsible for the brain implants in the creatures the player character has been fighting. This non-player character is hostile but may be fooled by wearing the ghoul mask. The Surgeon has the key to two safes and a cell nearby. The cell holds Stefan, a prized glowing one subject.

This Red Racer factory appears only in Fallout 3.

Bottlecap mine
Add a photo to this gallery
Retrieved from "https://fallout.fandom.com/wiki/Red_Racer_factory?oldid=3366431"
Community content is available under CC-BY-SA unless otherwise noted.