Red Menace is a Pip-Boy game tape in Fallout 4, which serves as propaganda against Chinese communist forces. It was published by Vault-Tec Game Studios in 2075.[1]

Selectable as a playable game on the Pip-Boy 3000 Mark IV, on the Inventory, Misc tab. The player must rescue Vault Girl from an anthropomorphic Chinese flag by dodging bombs and jumping barrels while climbing the stairs. A T-45 power armor suit can be acquired which makes Vault Boy immune to any form of damage, although at the sacrifice of not being able to climb ladders. It ends after 10 seconds.

The game can be found on the Vault 111 recreational terminal in the cafeteria.

Red Menace is a reference to the 1981 arcade game Donkey Kong.[verification needed] 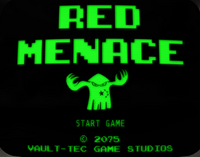