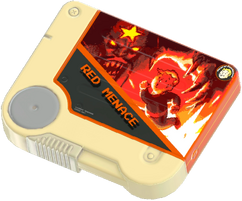 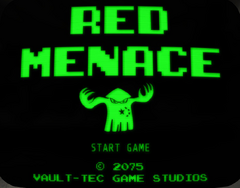 Red Menace is a Pip-Boy game tape in Fallout 4 and Fallout 76, which serves as propaganda against Chinese communist forces. It was published by Vault-Tec Game Studios in 2053. In Fallout Shelter, it is possible to find a Mr. Handy gloat about his high score in Red Menace, boasting that humans' gaming skills are inferior to his by comparison.

Selectable as a playable game on the Pip-Boy 3000 Mark IV, on the Inventory, Misc tab. The player must rescue Vault Girl from an anthropomorphic Chinese Flag by dodging bombs and jumping barrels while climbing the stairs, similar to Donkey-Kong and Donkey-Kong JR.

This game is a parody of the famous 1981 Nintendo arcade game Donkey Kong.

Add a photo to this gallery
Retrieved from "https://fallout.fandom.com/wiki/Red_Menace?oldid=3496101"
Community content is available under CC-BY-SA unless otherwise noted.