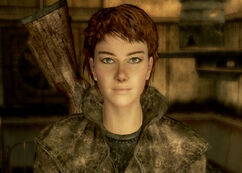 Red Lucy Face Holder is a clone of Red Lucy, but with a different name. Her Karma is evil, and she has no sexy sleepwear in her inventory, suggesting the developers had other plans with her in the early stages of creating the character.

Red Lucy Face Holder was added during the development stages of Fallout: New Vegas, but was cut from the final retail release of the game.

Retrieved from "https://fallout.fandom.com/wiki/Red_Lucy_Face_Holder?oldid=3125598"
Community content is available under CC-BY-SA unless otherwise noted.