The Red Glare is a weapon in the Fallout: New Vegas add-on Lonesome Road.

A prototype rocket launcher developed in the Hopeville Missile Base features an American flag on the barrel ammo canisters, a digital interface, and a unique self-compressing, pump-action reloading mechanism.

The Red Glare feeds from a rocket canister and is fully automatic, capable of emptying its magazine in a matter of seconds. It is fitted with a scope, which makes it effective at mid to long-range. A bright red light is emitted from the weapon when firing, as well as from the rockets during flight and impact. The standard rockets have a splash radius of 500 units, or about 7.8 yards. The Red Glare has a default scope of x2.86 magnification. The far sighting modification increases this to x4.35 — the highest magnification in the game.

The Red Glare can fire a total of about 2245 rockets, the equivalent of 173 reloads, from full condition before breaking.

This weapon's name is a reference to lyrics of The Star-Spangled Banner, specifically the line "and the rocket's red glare, the bombs bursting in air, gave proof through the night that our flag was still there."

The main section (outside grip, back end of the barrel, targeting component) may "detach" from the front of the barrel, moving back and to the right by one foot each. This can be fixed by unequipping the Red Glare and subsequently re-equipping it. [verified]

A pre-release shot of the Red Glare

Schematics in the armory and missile silo 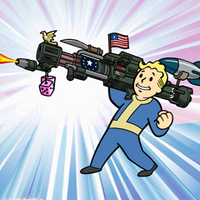