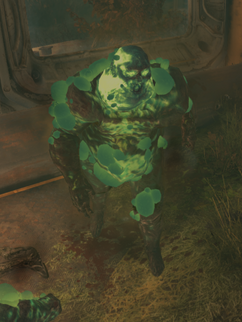 Red was a survivor from Harpers Ferry who, along with Cole, Billy and Lucas, was sent to Vault 94 by the mayor of Harpers Ferry, Miranda Vox.

Upon arrival, the group was suspicious of the vault dwellers, thinking that their altruism was a cover for something sinister. They barged into a community meeting of the dwellers and demanded that the vault's leader, Pastor Gabriella Salavar, tell them what the dweller's true game was. When the genuinely altruistic dwellers informed him there was no game, Cole lost his patience and told his men to open fire.[1]

After they realized that the vault didn't have weapons, they massacred the residents with the weapons in their possession, including Red's minigun. Once in the vault, they found the security field surrounding a Garden of Creation Kit and forced their way through it. Not realizing what the G.E.C.K. was, Cole assumed it was some kind of mind control device and ordered Red to shoot it with the minigun, destroying it and causing an explosion which blanketed the Mire with a cloud of mutagenic gas.[2][3] He and the rest of his team are found as feral ghouls during the quest Vault Mission: Meltdown.

Red appears only in Fallout 76, introduced in the Nuclear Winter update.

Retrieved from "https://fallout.fandom.com/wiki/Red_(Nuclear_Winter)?oldid=3231421"
Community content is available under CC-BY-SA unless otherwise noted.