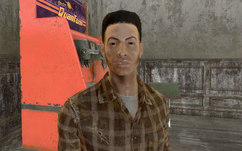 “You're all a bunch of psychopaths! And I love you for it.”

RedEye is the unseen host of Raider Radio in Nuka-World in 2287.

RedEye is the DJ for Raider Radio. He also plays the role of the PA system announcer during the quest Taken for a Ride.

There are two stories describing the origin of his nickname told by himself in his radio broadcasts. The first ascribes it to him allegedly bursting every blood vessel in his eyes after extreme intoxication from a drinking contest and lifting a massive guy up above his head after his victory. The other is supposedly from when he first met Colter, saying that Colter called him RedEye due to his lack of sleep giving him bloodshot eyes and making him look "really cool."

The location from which RedEye broadcasts from is never identified, although it is somewhere in Nuka-World, and he is never actually encountered in the game.

RedEye appears only in the Fallout 4 add-on Nuka-World.

Sometimes, even after killing the raider gangs and finishing Open Season, RedEye will still be broadcasting news of the Sole Survivor's achievements for the raider gangs. He will stop broadcasting this news when the player character tunes into the radio for some time.[verified]

Retrieved from "https://fallout.fandom.com/wiki/RedEye?oldid=3316786"
Community content is available under CC-BY-SA unless otherwise noted.
... more about "RedEye"
RDF feed
Has platform
Playstation 4 +