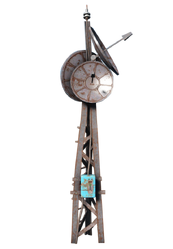 “Attention Commonwealth residents. Are you looking for a safe place to settle? Home in on these coordinates. If you're willing to work hard, you can make the Commonwealth a better place.”— Broadcast via the radio beacon

Recruitment radio beacons are constructible settlement objects featured in Fallout 4, which can be built through a workbench.

These beacons consist of a large radio antenna, which, once built and supplied with the necessary power, will transmit a radio station listed as settlement recruitment beacon, attracting randomized settlers.

The transmission can be turned on and off using the switch at the base of the tower, and while on, can be listened to just like any other radio station. The range of these beacons can be extended by activating relay towers near the settlement to boost the signal, increasing the recruitment of settlers.

Retrieved from "https://fallout.fandom.com/wiki/Recruitment_radio_beacon?oldid=3298041"
Community content is available under CC-BY-SA unless otherwise noted.
... more about "Recruitment radio beacon"
RDF feed
Has platform
PC +, Playstation 4 +  and Xbox One +