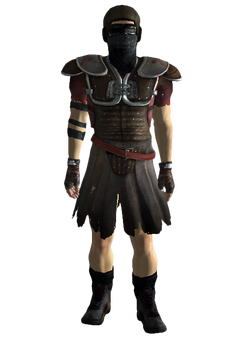 Recruit legionaries are members of Caesar's Legion living in the Mojave Wasteland in 2281. They form the backbone of the Legion and are the most common type of legionary.

The lowest rank, often considered as "expendable" in the eyes of higher-ranking officers, such as the Legate and veteran decanii. These legionaries come from the various tribes conquered or integrated by the Legion. They go through training, which, given the nature of the Legion, is no simple task. These legionaries are better trained than the average NCR trooper when it comes to sheer conditioning and hand to hand combat. They are less equipped and trained in the use of firearms than their NCR counterparts. Their level of combat experience tends to vary, but all have yet to distinguish themselves to earn the rank of prime legionary. They are seen throughout the wasteland in scouting and raiding parties. They are typically led by a recruit decanus. All of them are absolute in their devotion to Caesar and the Legion, and will gladly give their life for their cause.

Recruit legionaries can be found throughout the Mojave Wasteland and can be seen ambushing a caravan just north of the Legion raid camp. They can also be found at Legion bases such as Nelson.

Concept art, Behind the Bright Lights & Big City
Add a photo to this gallery
Retrieved from "https://fallout.fandom.com/wiki/Recruit_legionary?oldid=3327091"
Community content is available under CC-BY-SA unless otherwise noted.