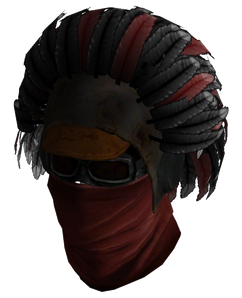 The recruit decanus helmet is a piece of Legion headwear in Fallout: New Vegas.

This helmet is worn as a symbol of rank, as a recruit decanus is the leader of a squad or platoon of recruit legionaries.

It consists of black goggles and a red face wrap, along with a football helmet which has black and red feathers flowing backwards. It provides a Damage Threshold of 2 and can be repaired with other decanus helmets.