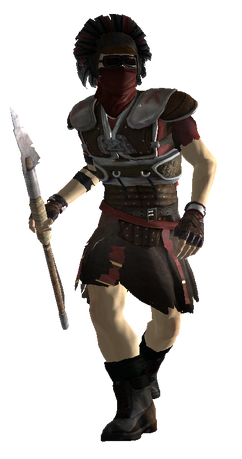 A recruit decanus (plural decani) is an officer of Caesar's Legion in the Mojave Wasteland in 2281. They work either as an assistant to a centurion or the head of a small camp of the legion.

Caesar based this rank on the unit leaders of the ancient Roman army. The decani are recognizable with their helmet surrounded by feathers. The seniority of a decanus is measured by the color of the helmet's feathers, which are predominately black and some red for a recruit decanus, black with white tips for a prime decanus, and black, red, and white for a veteran.

Concept art, Behind the Bright Lights & Big City
Add a photo to this gallery
Retrieved from "https://fallout.fandom.com/wiki/Recruit_decanus?oldid=3307336"
Community content is available under CC-BY-SA unless otherwise noted.