Please note that most of the issues recorded in this article have been fixed on all three Fallout 3 platforms with the 1.1 patch.

Only for PC version

This article talks about using console commands to compensate for bugs and, as such, only applies to the PC version, with the exception of the specific part concerning consoles and the "Getting Them Home" section.

In Fallout 3, bugs are still prevalent, and sometimes named non-player characters in Fallout 3 can disappear or die by themselves. It can be an annoyance, like missing security bots that you can repair for the Big Trouble in Big Town quest, something serious, like missing Walter which prevents you from completing his minor quest at all, or even missing Colin Moriarty or Moira Brown, which prevents you from advancing in the game. (In Colin's case, a character with sufficient Science skill can still hack his private computer to determine James' location and continue the main quest without necessarily skipping steps. Be prepared for a minor Karma loss, however. Alternatively, a male character with the Lady Killer perk can get the computer password from Nova.)

The moveto command mentioned later may need to be repeated twice if it didn't succeed at the first try, as the engine sometimes needs to load additional packages, which it will do only after a command fails once. prid gives exactly the same result as clicking objects in console mode. So, if you see a corpse you want to resurrect right before your eyes, you can just click it instead of typing the prid command.

A non-player character may still be alive but may have wandered through gaps in world geometry into some uncharted nothingness or in a void below ground. First, you may want to check where is that non-player character right now. Sometimes you'll even find out that he's really perfectly okay, just standing in a place you didn't think of. Open the console and enter this command:

After a short time and, probably, a loading screen, if a non-player character wandered to another world cell, you'll find yourself near your target or his corpse. You may talk to him and finish what you need right there, but even better, if the non-player character is really not where he's supposed to be, just bring him back where he belongs. To do so, go to the general location where this non-player character appears (so his AI won't have much trouble returning to his routine tasks) and type:

After that, the non-player character should appear directly in front of you and resume his usual activities. In case he managed to die somewhere, you'll get his corpse instead — see the next section for more.

A non-player character may still be in the game but for some reason invisible. He has a location you can move to as mentioned above. When you summon him to you he's not there, but moving to him again brings you to where you summoned him.

In this case just follow the instructions for "Dead", below.

Sometimes non-player characters die by wandering off the cliff or spending too much time in irradiated areas (like the bomb in the center of Megaton). In such a case you can even find his or her corpse around where he usually is. First, you may want to bring his corpse back to where it belongs, as described in the previous section and then type the following commands:

Should a companion non-player character die (example: Fawkes), the resurrected non-player character may be in the state they were in before they joined you, and will not offer companion dialogue options (a resurrected Fawkes may merely tell you to "Go away" when you attempt to initiate dialogue). To reinitialize them as a companion, as described in the notes for Dogmeat, use the "resetquest" command followed by the appropriate quest Form ID.

Ex.: After resurrecting Fawkes, enter "resetquest 943ee" without the quotation marks. Talk to him as if recruiting him for the first time.

Getting to missing Megaton citizens on Consoles

Extensive testing on the 360 AND PS3 has revealed that if some of your precious Megaton citizens have gone missing — for example, Moriarty (though he is not absolutely necessary to complete the storyline) has vanished and you suspect that he's in the uncharted void — you can still find them! Of course, it'd take a lot of work to get him/her back to Megaton but you can still talk to them and get their quests, etc.

This little trick involves the plane on Lucas Simms' roof, jumping over Megaton walls, and walking in the unmapped void for some time. By all accounts, this will not completely break your game (although there might be that tiny possibility), however, there is a chance that the game will crash while walking a short distance from Megaton. This may simply occur because the player is walking in unmapped space, however, some have reported that it may be due (in the case of Walter) to the number of pieces of scrap metal the player is carrying. Anything over 20–25 pieces of scrap metal seems to cause some bugs in Walter's unmarked quest.

Before attempting any of this, please ensure that you save your game.

To get started, you need:

Make your way to the roof of Lucas Simms' house, and then climb on the plane wreck there, using the railing on the left-hand side of the catwalk when you are facing the plane. After you're on the railing, jump on the tiny pipe crank sticking out the wreck. Then jump your way on the plane, all the way to the top, until you manage to jump your way over the Megaton walls. It might take some patience but when you get on top of the plane, save, so if you fail the jump you don't need to do all the climbing again.

When you're outside Megaton, there are some pieces of the landscape there (i.e. what you can see through the gaps in Megaton's walls), but most of it is just gray void with grass on it. You can walk where the land should be, it simply doesn't have any textures on it or anything. Take one stimpak to heal your possible cripple from the fall if you want to. If you are not strong enough to survive the fall, save just before you land then reload the save. You should land safely. In any case, start making your way towards Springvale School. Using your Pip-Boy World Map will help a lot in this.

After you're where Springvale School should be (You should be able to identify this by another plot of textured map shining in the uncharted void) start whacking your V.A.T.S. key. Eventually, if any non-player characters have been bugged into here, it should target one. Many of the generic Megaton Settler non-player characters tend to end up here and, in my case, I found Nathan and Colin Moriarty there as well.

All the non-player characters there talk as they normally would. They don't move unless you attack them, in which case they either flee or chase you for a bit until they give up and go back to normal. If one could somehow get them follow you (counter-pickpocketing a melee weapon in their inventory and taking away their gun and getting them to attack you), it might be possible to lure them back to Megaton (The big door that opened when you first arrived at Megaton is now closed, but you can walk through it) they might return to their everyday lives, but that's just a theory, after all, this might be the first investigation on this, so this trick needs a lot more research. For a video on how to do this, please visit the Youtube guide (thanks to fALConxxii/I3lackjackx).

Note: It is possible to get up to the plane on Lucas Simms' house without going into his house. You'll simply need an object like a barrel (one can be found near the Craterside Supply). Simply pick it up and go to the Water Processing Plant. Now, if you go to the right of the Water Processing Plant, you'll be right next to a small part of the roof of Lucas Simms' house. Place the barrel next to the railing near his roof, making sure that it's standing up. It's pretty tricky to get it standing up, but once you do, you can go onto the next part: jump onto it. The physics for the barrel is very shoddy and the barrel may fall over or even randomly glitch up, but keep trying. Once you are on, feel free to save. Now simply just jump onto the roof. Sometimes, your legs will just clip the bottom of the roof, and you won't make it, and of course, the barrel will fall over, but keep on trying. Eventually, you'll make it up. Then just walk to the left, and into the plane.

It is possible to lure the non-player characters back to Megaton and return them to their everyday life, but it will require effort.

Firstly you need them to chase or run from you depending on if the non-player character is violent or not. This can be done in many ways, but a simple punch to the face works best. It would be a good idea to drop a stimpak into their pocket beforehand so they can heal themselves later. If it is a non-player character that reacts in a violent way you should pickpocket then steal his/her gun.

After waiting 24 hours, fast travel back to Megaton, and the non-player character will have returned to his/her normal routine.

Note: When fast traveling back to Megaton you may be attacked; simply run back out of the city, wait for a while, then return and they won't try to kill you.

Note: If you are trying to get Jericho to be a follower and he ends up in the void, start by using the above strategy of jumping over the wall and heading out to where the school should be. If Jericho is there just pay him 1000 caps as you normally would hire him. You will notice he will not follow you but not to worry, all you have to do is run back to the Megaton door and go through it. This will send you outside of the city complete with Jericho in town! (Tested on Xbox 360) 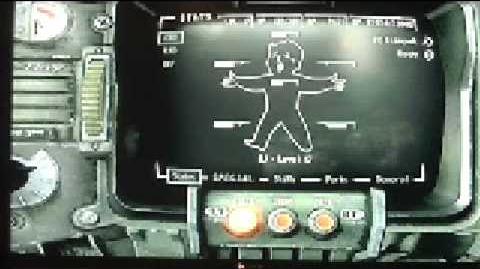