A recon craft is a small alien ship with a disc-shaped rear body used for stealth operations.

In 2277, a recon craft, designated as Theta, was on a mission to Earth. The ship crashed in the Capital Wasteland, north of Minefield, and northwest of Greener Pastures Disposal Site, leaving the vehicle heavily damaged and the pilot dead. Sometime later, the crashed recon craft began broadcasting a radio signal, the Recon craft Theta beacon.

Once the Lone Wanderer approaches the ship for inspection, they are immediately abducted by the Mothership Zeta. At the same time of the abduction, Theta is beamed up by Zeta and stored in the vessel's hangar bays.

By 2281, another recon craft can be located north of Horowitz farmstead in the Mojave Wasteland.

The recon craft Theta can be found at the alien crash site in Fallout 3, and, later, in Zeta with the Fallout 3 add-on Mothership Zeta.

An unnamed recon craft can also be found at the crashed alien ship in Fallout: New Vegas, though this craft occupied three alien passengers rather than one. 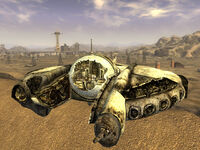 Close-up of the inside of the cockpit