Intended to serve as the under-armor of the T-45d power armor, the recon armor is a vacuum-sealed asbestos jumpsuit covering the entire body. Attached to it is the interface and mounts for the T-45d power armor. Its purpose is twofold: it allows the user to actually operate the armor and protect soft tissue from moving parts inside the suit and heat. Unlike the under armor for the T-51b power armor models, this one is also designed to offer limited protection from anti-personnel weapons.

This armor is identical in appearance to the recon armor available in Fallout 3, though with a much higher value. It provides a damage threshold of 17 (same as combat armor, reinforced) as well as a bonus of +5 to Sneak and can be repaired with other suits of recon armor, Stealth suit Mk II, NCR trooper armor or any combat armor with the Jury Rigging perk. 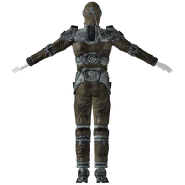