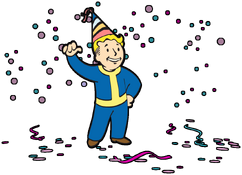 “The big day has arrived. It's time to leave the Vault!”

Reclamation Day is a main quest in Fallout 76.

It is October 23rd, 2102 (2103 as of Wastelanders). The quest begins after character creation and after the player character has picked up the Pip-Boy next to the door of their room. Waypoints and cardboard cutouts of a Vault Boy will lead the player character through the vault, as the voice of the overseer plays. Items such as food, clothing, and medical items can be collected from various stands lining the path to the exit. Basic gameplay mechanics including the C.A.M.P., hunger, and dehydration are explained along the way, including via interaction with the various Mr. Handy robots located at the stations along the way. As of Wastelanders, there are some minor changes to the dialogue from the Mr. Handy robots due to it having been a full year since the vault originally opened, so Crutchley and the other Mister Handys had to endure hearing the Overseer's message over and over again until the last of the residents finally left so the vault could finally be shut down. Don't forget to also get a free level up by collecting the perk cards at the final station before heading for the vault door. Exiting the vault will complete the quest.

Finding the Overseer's log - Vault 76 holotape, which explains where the overseer has gone, is optional. If not collected while still in the vault, the Mr. Handy, Pennington, waiting outside below the vault door will give it to the player character upon speaking with him.

If one fails to take the holotape while still inside Vault 76, it can obtained from Pennington right after exiting the vault.

Retrieved from "https://fallout.fandom.com/wiki/Reclamation_Day?oldid=3366463"
Community content is available under CC-BY-SA unless otherwise noted.