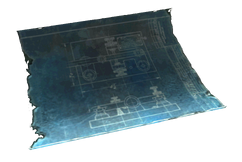 It allows you to create Cook-Cook's Fiend stew at a campfire. It tells that you need the following ingredients: one fresh potato, two beers, one brahmin steak, and one jalapeño pepper.

It can be found north of the South Vegas ruins west entrance, a Fiend encampment defended by Cook-Cook and his gang. It is lying on a shelf along with the required ingredients for the dish except beer.

This recipe allows you to make Cook-Cook's Fiend Stew.

Add an image to this gallery
Retrieved from "https://fallout.fandom.com/wiki/Recipes_-_Cook-Cook%27s_Fiend_stew?oldid=2775478"
Community content is available under CC-BY-SA unless otherwise noted.