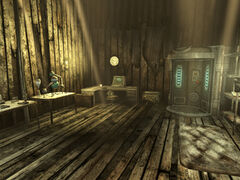 “Some scientist named Lesko moved in with the Wilks family across the street. They are helping him make some sort of a structure on the old lot near the diner. Lesko offered to pay me caps if I helped, but I declined. I dunno who he's working for, but I don't think they're still looking for me.”— William Brandice

The recently built shack is a location in Grayditch. It is the house of Doctor Lesko.

It is a small shack containing a computer terminal and empty protectron pod, scientific equipment, and a few metal boxes. Accessing the terminal provides some background information on Lesko's experiments and a map-marker.

The recently built shack appears only in Fallout 3.

It is possible to become trapped in this shack, unable to move. [verified]