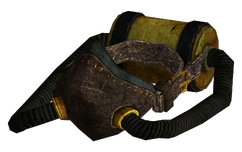 The rebreather is a piece of headgear in Fallout: New Vegas.

The rebreather provides a Damage Resistance of 3, but no DT, and grants unlimited oxygen while submerged underwater. The player cannot drop or sell this item, and its condition will never degrade. It fills the mask slot, so it does not prohibit the wearing of headgear that only covers the top of the head (e.g., combat helmets). It cannot be worn with certain helmets, such as power armor helmets, or glasses (e.g. Dr. Mobius' glasses), but can be worn with most hats.

The item is received from Jack at Nellis hangars during the Volare! quest if the player has a Science skill of at least 45, or a pressure cooker.