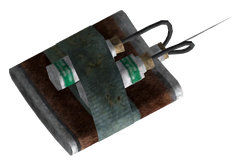 Rebound is a consumable item in Fallout: New Vegas.

Rebound appears as a metal hip flask filled with liquid, and a pair of glass vials of pre-War drugs taped to the side, which flows up through tubes into the mouth of the flask. A needle on the top administers the drug cocktail, causing a steady rush of energy rather than an instant energy rush.

Rebound's effects are similar to Jet, in that it boosts the player character's AP level. However, unlike Jet, Rebound continuously resupplies the player character with AP for a duration of time, effectively boosting their AP recovery rate. Combined with Jet, this can be a very effective AP regeneration method, albeit carrying the risk of addiction.

Retrieved from "https://fallout.fandom.com/wiki/Rebound?oldid=3163696"
Community content is available under CC-BY-SA unless otherwise noted.