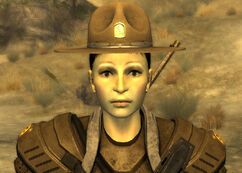 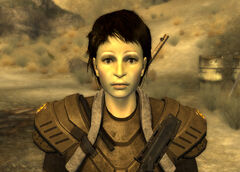 Rebecca, without her hat

“"High casualties?" We've had one broken ankle, but nobody at this post has died.”

NCR Ranger Rebecca Lineholm is the commanding officer of Ranger station Alpha[1] in 2281.

Ranger Lineholm joined the NCR Rangers in 2271. After grueling training, she experienced the proudest moment of her life when she got her Ranger badge.[2] Currently she's in charge of Ranger station Alpha, once on the frontlines of the war with the Legion, now a mostly support outpost with a minimal chance of running afoul of critters, raiders, or the Legion.

Retrieved from "https://fallout.fandom.com/wiki/Rebecca_Lineholm?oldid=3170448"
Community content is available under CC-BY-SA unless otherwise noted.