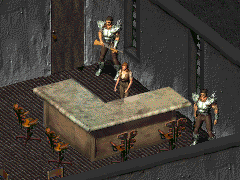 Collect money from Fred
Get book from Derek
Kill Metzger

Rebecca Dyer runs Becky's, a bar and casino in the Den West Side in 2241.

Rebecca is a very attractive young lady.[1] She is one of the Den's more upstanding citizens, especially compared to the likes of Metzger, Tubby et al. In the basement of her establishment is a still which she uses to brew liquor.

Rebecca appears only in Fallout 2.

At some point during development, Becky was called Maggie as can been seen from her unused dialogue file, DcMaggie.msg.

Retrieved from "https://fallout.fandom.com/wiki/Rebecca_Dyer?oldid=3347699"
Community content is available under CC-BY-SA unless otherwise noted.