Fallout Tactics
“What would St. Sony do?”

The Reaver Movement is a religious cult of humans dedicated to the worship of technology operating in the Midwest.

The Reaver Movement was founded many decades before 2197 in the Midwest. Their group established a headquarters in the former city of Newton, Kansas, where Reaver scientists began to examine and produce technology and weapons. They are very different than the Brotherhood of Steel, since they feel technology has an important religious significance and have religious beliefs in various technology-related fields. They are also more aggressive and have kept their likeness to raiders, acting like them when they come close to acquiring new technology.

Proof of how great their dedication is demonstrated by the fact that just after they learned about the destruction of a humanoid robot in Junction City around 2198, they immediately came to the town to retrieve the parts and established a compound outside, preparing for battle without worrying about whether anyone could head them off. Here the Warrior and their squad meet them for the first time. They were launching probing attacks against Junction City for the parts, but they were killed and the Midwestern Brotherhood of Steel recovered all of the humanoid-robot parts instead.

Sometime later, a Reaver delegate came to Bunker Delta of the Midwestern Brotherhood of Steel, bringing news that a large robot force of the Calculator's had all but annihilated the main camp of the Reaver Movement in Newton. The delegate called on the motion of the Midwestern Brotherhood of Steel for assistance in the defense of the city, and above all, to save the four Reaver elders: (Albert Lamore, Rodger Gaire, Glenda Close and Tobias Peste), who barricaded themselves in various locations throughout the city.

Normally, the Midwestern Brotherhood would allow one enemy to destroy another, but the Reavers had something to offer in exchange - a pulse rifle prototype developed by the Reaver Movement thanks to robot pieces that they had been able to scavenge, that had a devastating effect on electronics, which made it an effective weapon against the Calculator's robots. They agreed to give the Midwestern Brotherhood both a prototype of this weapon and instruction on its workings if Newton and the four Reaver elders were saved.

After the Warrior's squad liberated Newton, several Reavers decided to join the ranks of the Midwestern Brotherhood of Steel in order to fight the "Menace from the West," the army of the Calculator. Although the action of the liberation of Newton established official contacts with the Reaver Movement, the Midwestern Brotherhood elders were a little skeptical. Other Reaver survivors of Newton were temporarily placed in internment camps to await a further turn of events - set them free or restrict them to labor camps.

They are lead by the four Reaver elders and have a structure similar to a traditional government with politicians, chief of the army, a medical division, a science division, etc., but religious classes are also important in the Reaver Movement, like priests. Also, the priest is the only Reaver office that can be held in conjunction with the other classes, like scientist-priest. They are extremely numerous, and a group of about forty Reavers can be seen in Junction City just to get one item of technology and patrol the Midwest. Sometimes just one Reaver is found, but generally, they are in groups of 2 up to 8, supported at times by super mutants of Gammorin's Army.

The ambassadors care for Reavers people and their religion, acting like ministers. The leader of the ambassadors, and one of the four reaver elders, is the "1st Ambassador", Albert Lamore in 2197, his function is comparable to a president of the Reaver Movement. The leader of the Reavers army is the "General and joint chief of staff", also one of the four Reaver elders: Rodger Gaire in 2197. They give the orders for all major military projects and are assisted by captains in the field. Their medical leader and another Reaver elder is the "Chief of medical division" (also called the First Doctor), and is Glenda Close in 2197, who is in charge of medical research as well as practical applications of medicine in the field. The leader of the scientific research and the last Reaver elder is the "Chief of science division" (also called Chief of military science projects), Tobias Peste in 2197.

Also, they have priests allowed to perform the sacred rites of the Reaver Movement and acting as a mediatory between the Reavers and the Reavers' gods. They also have holy visions about prophecy or technology, fanciful or not, that sometimes take shape after in Temple-Laboratories, the Reaver workshops. They generally perform a period of fasting, permitting them to have better contact with their gods.

Technology is everything for the Reaver Movement, seeing it as sacred, searching for the spiritual enlightenment of science. Knowledge is divine for them and they don't hesitate to give courage in combat with citing the greatest invention of man or the scientific theory, like "for the glory of the transistor" and "by the spirit of Counter-Electric-Motor-Force!", they also refer to each other as brothers. They believe in a thing called the "current flow", connecting them between the spiritual world of technology and the real world.

They have and revere many gods called Tech-Gods - mostly based on electrical units or pre-War technology components - their domains being related to their function. The known Tech-Gods of the Reaver Movement are:

Like many religions, they believe in places similar to Hell and Paradise. The Reaver Hell, the place of all evil technology (like the Calculator's robot) is named the "Tech-Underworld" which has a large electric current traversing it called the "Styx River", a reference to the Greek underworld. It's the domain of Satansoft, a derogatory reference to competitor Squaresoft, (also called the "Dark One" by Reaver priests) and his acolyte Be'alza-Gates, who control hostile technology. For them, the Calculator's robots are the hydroelectric fiends of Satansoft, also called hell spawns. The Reaver Paradise, where the Reavers and especially the fighters killed during an honorable battle go to an afterlife that is named the "Eternal Assembly Lines of Panasonica", the domain of Panasonica.

While Reavers revere technological instruments and weapons, they think hostile technology against them, like the Calculator's robots, are possessed by a evil god named "Satansoft" and are their creature, a "Satansoft's creature". Each piece of recovered hostile technology are surnamed "evil part". They also have something called the "Holy Multimeter", allowing them to get answers on something, but it's only available for consultation by Reaver priests.

Before the official contact with the Midwestern Brotherhood of Steel, the Reaver Movement was hostile towards anyone except Gammorin's Army, who patrolled together sometimes to cover an area too far west for Gammorin's Army. As zealous worshipers of technology and their past as raiders, they act like them when they come to getting new technology, attacking anyone making their way through them with technologies. Apart from them, they see others as pagans without interest (even the Midwestern Brotherhood of Steel).

They all wear atypical armor created with woven steel cables with plates of interlocking steel mesh encased in cloth panels, like the Reaver banding and greater banding. They are technologically strong in cybernetics enhancements and surgical augmentations, often use for their body, mostly scanning sensor that allow at least to sweep an area of twenty feet, detecting even a person who is sneaking. They are also known to use enhanced eye sight, hand surgical implants, central processors and valve-tube augmentation.

Each member (especially the warriors) also have plenty of stimpaks and super stimpaks.

Even after Newton and the four Reaver elders are saved by the player, the Reavers encountered in the wasteland during random encounters will remain hostile to them.

The Reaver Movement appears only in Fallout Tactics.

Gareth Davies describes the group as first being raiders who found a military cache, beginning religion dedicated to the worship of technology.[1]

A reaver with a greater banding 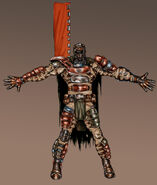 A reaver with a reaver banding 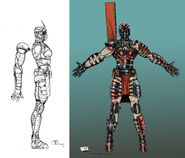 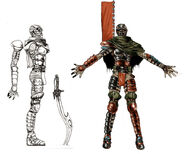