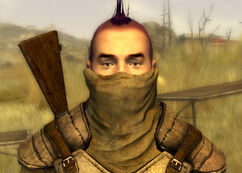 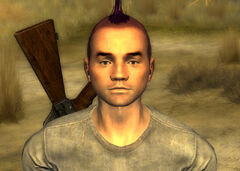 Razz, without his face wrap

“Poindexter's a smartass prick. O'Hanrahan's a big pussy, ain't good for shit in a fight. And Mags, well, Mags is cut out for something other than soldiering, you dig?”

Razz is an NCR soldier and part of the Misfits living in Camp Golf in the Mojave Wasteland in 2281.

Razz was born in Boneyard, and was a member of the Fiends before he joined the NCR. He has little respect for the other members of his fire team. He describes Pvt. O'Hanrahan as a "big pussy," Pvt. Poindexter as a "smartass prick," and hints that he considers Cpl Mags attractive, but incompetent.

Retrieved from "https://fallout.fandom.com/wiki/Razz?oldid=3168091"
Community content is available under CC-BY-SA unless otherwise noted.