Leader of the Blades
Thief (formerly)

00000129
“The Regulators. They are the ones that really run Adytum. Not Zimmerman. They come here and drag our people back to Adytum as slaves. They kill us when we try to fight them off. Sometimes they just come and kill a couple of us to bring to Zimmerman , so they can say we tried to break into their town, or some other ridiculous story.”

Razor appears only in Fallout and is mentioned in the Fallout Bible.

After Free Adytum from the Regulators is started, Razor may inexplicably die if the Vault Dweller leaves the Boneyard. None of the other Blades seem to die. In fact, dialogue still suggests that she is still alive after she dies.[verified] 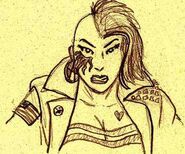