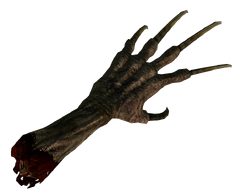 “This claw is larger and more impressive than those of lesser Deathclaws. You might be able to turn it into a weapon if you find a workbench.”— In-game message when looting Rawr's Talon

Rawr's Talon is only obtainable after killing Rawr, a very powerful deathclaw inhabiting the Divide. This variant of a deathclaw hand is the only one of its kind. It is also the only one that can be made into a weapon, the Fist of Rawr.

Rawr is found in a dark cave across from the Boxwood Hotel roof, behind the overflowing pipe and irradiated pool. 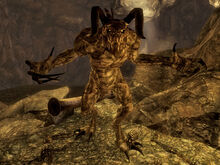 Rawr
Add a photo to this gallery
Retrieved from "https://fallout.fandom.com/wiki/Rawr%27s_Talon?oldid=3459664"
Community content is available under CC-BY-SA unless otherwise noted.