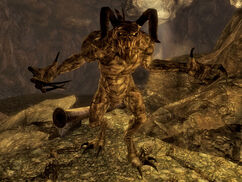 Rawr is a unique deathclaw found in the Divide in 2281.

Rawr can be found in a dark cave just past the Boxwood Hotel roof, near the pipe that has water spewing out of it. Entering the cave triggers a cave-in which will draw Rawr's attention, resulting in it starting a battle with the Courier. The Courier will be trapped in the cave until the second warhead, which will fall with the rubble, is detonated.

Its incredible speed, coupled with devastating claws, make it a dangerous creature to engage. Its victims include an NCR soldier named Gleeson, who managed to survive long enough to record a distress beacon requesting assistance. In the message, it is revealed that Rawr can be driven off with flares, as with any other deathclaw. Therefore, it is one of Rawr's weaknesses, as it will scare it for a short period of time.

When killed, Rawr will drop its own claw. It can be used to make the Fist of Rawr at a workbench, if the Courier has an Unarmed skill of 75.

"Rawr" is an internet slang for a roar, specifically that of a dinosaur or cat.

Retrieved from "https://fallout.fandom.com/wiki/Rawr?oldid=3474718"
Community content is available under CC-BY-SA unless otherwise noted.