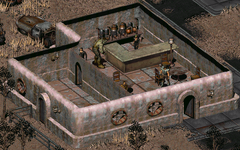 The Rawhide Saloon, run by Mira, is New California Republic's only saloon outside the walls. It has fair prices on many drinks and is also the haunt of Merk, the town's crime boss, who splits his time between here and his gambling operation which only he can grant access to.

The saloon is divided into two distinct parts. The bar is the biggest of the two rooms and consists of two sets of tables complete with three chairs each, the main counter, and a distillery behind the bar up against the back wall. The bartender, Mira stands behind it. Various barflies stand around, with an obnoxious super mutant called Lenny being the most noticeable.

The second part, accessible through the door on the lefthand side of the bar leads to an empty room, in which Merk holds his council during the night and twilight hours. As such he is surrounded by henchmen.

The Rawhide Saloon appears only in Fallout 2.