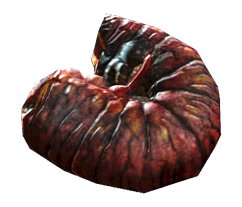 Raw fog crawler meat bears a vague resemblance to the curled shape of shrimp or crayfish, though, given the size of fog crawlers, retrieving the entire corpse seems unlikely. This in mind, it is likely a sausage or section of intestine. It can be cooked to produce fried fog crawler. Despite the extremely radioactive conditions fog crawlers are found in, raw fog crawler meat has a much lower radiation to health ratio than most meat in the Commonwealth.

Dropped by dead fog crawlers on the Island.

Retrieved from "https://fallout.fandom.com/wiki/Raw_fog_crawler_meat_(Far_Harbor)?oldid=3315446"
Community content is available under CC-BY-SA unless otherwise noted.