Finding the Garden of Eden
The American Dream 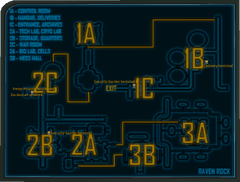 “This facility was designed for Continuity of Government, in the event that a catastrophe occurred. My terminal was installed to oversee the basic functions of the facility, and to act as a relay between other installations around the country.”— John Henry Eden

Raven Rock was designed at the beginning of the Cold War as a shelter for some of the top military officials from the effects of a possible nuclear attack on the United States.[1] The special ZAX artificial intelligence unit (later known as President John Henry Eden), was installed in the site before the Great War to serve as a monitoring system for Raven Rock and tasked with coordinating communications between the many Enclave installations scattered across the country. Many decades after the Great War, ZAX began to observe the Enclave force in the Enclave Oil Rig and it gained knowledge with the extensive archives left in its early A.I. data base. Slowly ZAX modeled its own personality, giving itself the name John Henry Eden.

At some point after gaining self-awareness, the A.I. John Henry Eden made contact with the Enclave leadership on the West Coast, establishing itself as a Presidential Advisor. Raven Rock came to serve as the central base of operations for the Capital Wasteland Enclave since the retreat of the Enclave force located in the Enclave Oil Rig in 2242, when John Henry Eden took control of the Enclave as the new President after the death of Dick Richardson.

Raven Rock is powered by a General Atomics nuclear reactor and gets its fresh water from deep underground wells and a mini purifier similar to other Vaults. Furthermore, it has manufacturing capabilities able to produce Vertibirds, power armor and weapons. This combined with a significant defensive robotic army, probably made Raven Rock the second most powerful Enclave outpost (after the Enclave Oil Rig). After the Lone Wanderer is captured in 2277, a civil war breaks out in Raven Rock between President John Henry Eden's sentry bots and Colonel Augustus Autumn and the Enclave troopers. Raven Rock is eventually destroyed by the Lone Wanderer after their invasion, or by Liberty Prime during the two weeks after the activation of Project Purity, if the Lone Wanderer didn't previously destroy Raven Rock.

Raven Rock has three levels, indicated by a number and a letter. Level three is the bottom and level one is the top. Raven Rock can be confusing to navigate, with its many corridors, rooms, and open areas being very similar to each other with few distinguishing differences.

This area starts in the holding cells. There are a total of 6 cells, in a U-shaped corridor. Some of these holding cells currently hold prisoners, like Nathan Vargas and Anna Holt. Upon exiting this corridor through either end, you will enter another, straighter corridor. In the middle of the corridor is the entrance to the bio lab and at the end of the corridor are two flights of steps leading to the mess hall.

The bio lab is where domestication units are attached to deathclaws, captured by units like Fauna Detail Charlie. It also holds "biopods" containing creatures such as a super mutant and ghouls for study. The lower area is rectangular with small rooms at each corner. The upper area also has the four corner rooms with small walkways connecting them. One of the rooms stores computer equipment while the other three hold medical equipment. One of the upper rooms has a door leading to level 2.

The mess hall is a simple room filled with tables. Opposite from the entrance is more stairs leading up to level 2. On the side, is a small kitchen area, containing pre-War food and a staircase leading underneath the mess hall's floor, where quite a few utensils can be found.

Those entering from the bio lab will start in the upper area of the tech lab, while those entering from the mess hall will enter a small room connecting the cryo lab to the tech lab. Both labs are identical layout-wise to the bio lab. The tech lab contains various pods with eyebots inside, while the cryo lab also contains pods with more animals, including a deathclaw and a yao guai. The tech lab's exit leads into a square room with several columns which then leads into the following corridor, while the cryo lab exits directly into the corridor.

The corridor is T-shaped, with the tech lab exiting at one end and the cryo lab exiting near another. At multiple points, there are staircases leading under the floor, with laser tripwires down there. The end of the corridor by the cryo lab exit is a room with a few empty deathclaw cages, as well as many lockers. There are also two rooms, containing a few beds. One of these rooms has a barrier with three containers behind it, to disable the barrier you have to hack an Average locked terminal (requires a Science skill of 50).

At the final end of the corridor, to the left is Colonel Autumn's room. This room too contains a barrier blocking three crates, requiring hacking an Average terminal to disable it. There is also the Energy Weapons bobblehead on the desk, as well as the ZAX destruct sequence in the footlocker at the foot of the bed. Opposite of Autumn's room is the stairs leading to the war room, a circular room with a map at its center and the entrance leading to the next section.

This section will start in a room with friendly sentry bots attacking Enclave members. After walking through a small corridor, you will enter a very tall room, with stairs in the middle leading up. At the top is President John Henry Eden who will not allow you to exit the room until agreeing to his request.

You will enter a straight corridor with enemies in it. You will have to turn into another corridor which leads to the exit. At the middle of the corridor, you can see Vertibirds taking off and can also find a deathclaw in a cage, which can be released with the nearby Average locked terminal. There will also be more friendly sentry bots here helping you fight the Enclave. At the end of the corridor is the exit to the Capital Wasteland. However, upon exiting you can not re-enter. 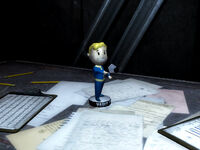 Raven Rock appears only in Fallout 3.

A yao guai in cryogenic stasis

A Vault 87 super mutant in stasis 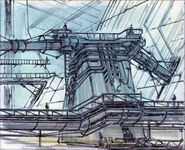 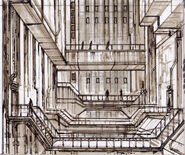 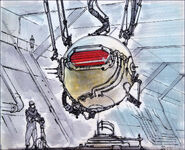 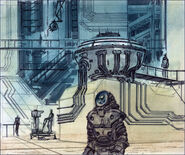 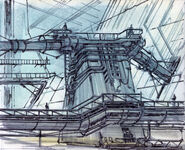 Nathan now held prisoner by the Enclave he had supported. 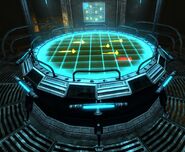 Enclave laser tripwire
Add an image to this gallery

Retrieved from "https://fallout.fandom.com/wiki/Raven_Rock?oldid=2274138"
Community content is available under CC-BY-SA unless otherwise noted.