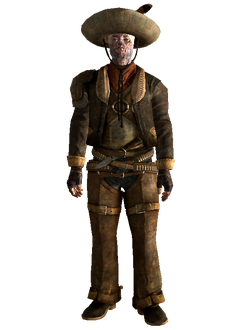 The Raul armor (also known as Vaquero outfit)[1] is a piece of clothing worn by Raul in Fallout: New Vegas.

A pre-War, Halloween costume that Raul had found in an abandoned costume shop in Mexico City, Raul used it as his calling card in his younger days earning him several nicknames around Mexico city.[2]

He also used this outfit to make his sister laugh.[3]

The outfit consists of a sombrero with tie together chin strap, a red bandana, brown chaps over dark gray pants, a brown jacket with a single pauldron over the left shoulder, an unsheathed dagger and two bandoleers around the waist and a pair of cowboy boots with ringed spurs.

This outfit can be unlocked for Raul in the unmarked quest Old School Ghoul.

Vaquero means "cowboy" in Spanish, and was the name for the cowboys of Spanish America. 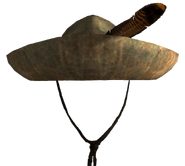 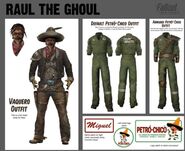