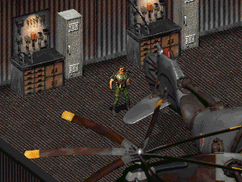 “Sorry, man, but I don't have time to chit-chat, you know? I got to get this bird working.”

Raul is an Enclave mechanic in Fallout 2.

Raul is Navarro's premier Vertibird mechanic in 2241, walking around in a permanently filthy military uniform, covered in grease spots.[1] He has a characteristic attitude, speaking about himself in third person and an unhealthy obsession about keeping Vertibirds in top shape, disliking even qualified Enclave pilots' operation of his babies.

Raul has a long running rivalry with the head of the mechanics, Quincy, to the point that even the slightest bad remark about him results in a fistfight in the mechanics' garage. He also takes care of Dr. Schreber's electric motor that was taken out of the doctor's robot, K-9.

Raul appears only in Fallout 2.

Retrieved from "https://fallout.fandom.com/wiki/Raul_(Fallout_2)?oldid=3073234"
Community content is available under CC-BY-SA unless otherwise noted.