Raul's shack is the home of Raul Tejada in 2281. It is located north-northeast of Vault 34 on the eastern outskirts of New Vegas.

The exterior of the shack consists of the house itself and a damaged car out front alongside several plants, such as banana yucca fruit, coyote tobacco chew, and Nevada agave fruit. Outside, a rare malnourished brahmin calf can be found. Inside the shack are a workbench and a bed.

A copy of Guns and Bullets - On a crate on the floor directly to the left upon entering the shack.

Rarely, after entering Raul's shack, after downloading the Dead Money add-on, the whole shack may turn into a large void. Restarting the console or uninstalling the Dead money add on may fix this. [verified] 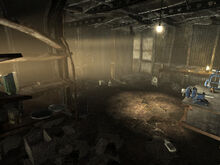