Ratslayer is a weapon in Fallout: New Vegas. It is the unique variant of the varmint rifle.

Ratslayer has a black synthetic stock instead of the standard wood, parts that appear to be made from stainless steel, and has 69 tally marks on the stock next to an image of a mole rat's skull.

Compared to the varmint rifle, the Ratslayer is lighter, boasts a higher damage-per-second, a much higher critical multiplier, and has all of the possible varmint rifle modifications: extended magazine, silencer, and night scope with superior magnification (3.5x compared to the 2.86x on a standard varmint rifle scope).

Ratslayer can fire a total of about 995 standard rounds, the equivalent of 125 reloads, from full condition before breaking.

Varmint rifle - The standard variant found throughout the Mojave Wasteland.

Inside the Broc flower cave, below a desk in the makeshift laboratory on the upper level. It may be quite hard to find, as there are lots of giant rats in this room. With the Wild Wasteland trait, the area around the Ratslayer will have several giant rats called "rodents of unusual size."

Location in the Broc flower cave 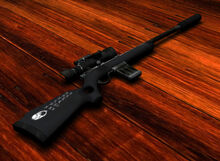 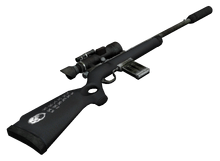