The Rat Caves are a place underneath Klamath. This is the source of the rodent scourge. Citizens have lived in the buildings above, and perhaps inside the caves, but were killed by the invading rats. The rodents are commanded by Keeng Ra'at.

The Rat Caves appear only in Fallout 2. 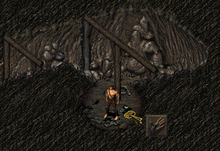 Tool at the far right of the third section, repair bot next to it
Русский Українська 中文
Community content is available under CC-BY-SA unless otherwise noted.
Advertisement