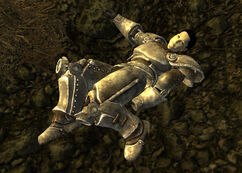 Paladin Raseleanne was a paladin sent out to scout Nellis Air Force Base. She was killed and now lies between some ruined houses, close to the base.

She and another Brotherhood of Steel paladin were sent to investigate Nellis AFB for parts that could be used in the HELIOS One facility. They were killed by artillery fire from the Boomers, despite assurances that the Boomers would not have technology which would pose a major threat to her in her full Brotherhood T-51b power armor.

Profile shot Raseleanne (resurrected)
Add an image to this gallery
Retrieved from "https://fallout.fandom.com/wiki/Raseleanne?oldid=3237611"
Community content is available under CC-BY-SA unless otherwise noted.