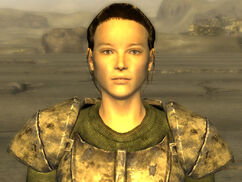 “I'm Raquel, master-at-arms for the Nellis homeland. Mother Pearl, our eldest, wishes to speak to you.”

Raquel is a Boomer living at the Nellis Air Force Base in 2281.

Raquel is one of the few NPCs in Fallout: New Vegas who wears a Pip-Boy 3000, and the only Boomer who does not wear one of their signature jumpsuits.

Retrieved from "https://fallout.fandom.com/wiki/Raquel?oldid=3251777"
Community content is available under CC-BY-SA unless otherwise noted.