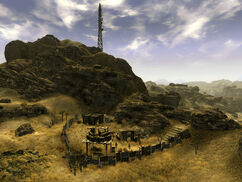 Return to Sender
We Will All Go Together 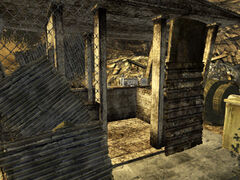 “The Legion's been sending raiding parties across the river in larger numbers lately. We don't have the men at this post to intercept them all.”— Ranger Erasmus

Ranger Station Echo is a location in the Mojave Wasteland in 2281. It is located equidistant from the cliffside prospector camp to the northeast and Coyote Mines to the southwest. The New California Republic has established a ranger station here to observe and convey the movements of Caesar's Legion at Cottonwood Cove.[1]

The station consists of a few structures including a sandbag overlook, shack, and tent. A large radio tower protrudes from the clifftop. The station can be accessed from the west and is inaccessible from any other direction. The Courier can initiate dialogue with the commanding officer, Ranger Erasmus, to gain insight on current events. Comm Officer Green operates the radio. There are a few radioactive craters to the south of the camp. The southern-most crater is filled with radioactive water that results in upwards of 2 rads per second.

Graffiti next to the backdoor

Bigger radioactive bomb crater, filled with water
Add a photo to this gallery

Retrieved from "https://fallout.fandom.com/wiki/Ranger_station_Echo?oldid=3435931"
Community content is available under CC-BY-SA unless otherwise noted.