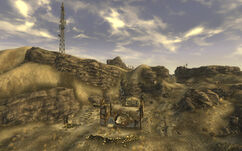 “Keeping watch on the river and looking for anyone trying to cross it. The Legion likes to send infiltration teams over on rafts.”— Ranger Pason

Ranger station Delta is an NCR controlled location in the Mojave Wasteland in the year 2281. It is located southeast of Boulder City and northeast of Camp Forlorn Hope.

The ranger station was built on the remains of a ruined farmstead, which is still visible. Ranger Pason informs the Courier that their goal is to keep an eye on the river to ensure no one crosses it, namely members of Caesar's Legion.

There is a destroyed house not too far from the tent that serves as a command center for those stationed here. There is also an Average locked cellar among the ruins of the house. Within the cellar is a reloading bench and an Average locked gun cabinet with lower grade weapons. The remaining items found inside the cellar are primarily Sunset Sarsaparilla bottles and foodstuffs. Hanging on the wall near the Sunset Sarsparilla lamp is a very detailed pre-War map of the dam and its surrounding areas. Such maps exist at all ranger outposts, as well as Camp Golf and the Hoover Dam itself. 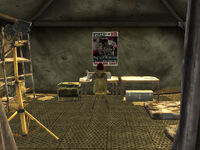 Cellar with a storage area, reloading bench, a bed and pool table
Add a photo to this gallery
Retrieved from "https://fallout.fandom.com/wiki/Ranger_station_Delta?oldid=3320480"
Community content is available under CC-BY-SA unless otherwise noted.