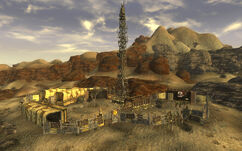 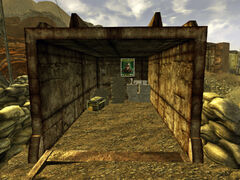 “This is the frontier of NCR territory, and we're the first line of defense. You won't find much in the way of civilization east of here.”— Tilden, Comm Officer of Ranger Station Bravo

Ranger station Bravo is a location in the Mojave Wasteland in 2281. It is located northeast of Bitter Springs recreation area. It is positioned to monitor the Legion, ensuring they do not have the opportunity to flank Lake Mead, circumventing the defenses at Hoover Dam.

Ranger station Bravo is in the northeast section of the map and is the easternmost NCR base in the Mojave Wasteland. The base consists of several trailers and containers. There are two containers with NCR propaganda posters, of which one has the radio equipment.

Retrieved from "https://fallout.fandom.com/wiki/Ranger_station_Bravo?oldid=3320479"
Community content is available under CC-BY-SA unless otherwise noted.