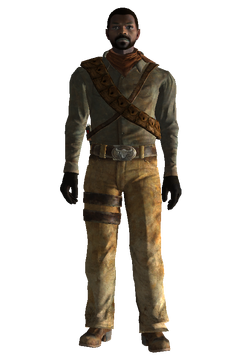 There are multiple ranger outfits: the Ranger red scarf outfit, the Ranger casual outfit, and the Ranger vest outfit. The three outfits do not provide DT or other effects. They are all commonly composed of a scarf, a dress shirt, khaki pants, gloves, boots, and a belt with a large buckle. They can be repaired with other ranger outfits or any light clothing through the Jury Rigging perk.

There are multiple ranger hats: the Ranger hat, Ranger brown hat, Ranger gray hat, and the Ranger tan hat. Each hat provides +1 to Damage Threshold and can be repaired with any of their variants or other headgear with the Jury Rigging perk.