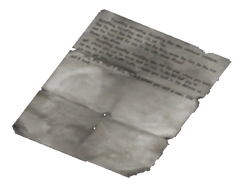 Ranger holodisk message is a holodisk and a note in Fallout: New Vegas.

The holodisk is located next to a service rifle and ranger hat on the second floor of a ruined building just outside the entrance to the Boulder City ruins. The message it contains is also found as a paper note at Whittaker farmstead.

We're cut off from the rest of the platoon, and there are Legionnaires all over the place. There's no chance we can get out of here before they blow the town, so we're going to hold out against them as along

as we can. If anyone gets this I'd like to make sure that Private Jeffery Hui and Corporal Marcus Christensen are commended for their valor and sacrifice. Both have upheld the ideals and honor of the New California Republic with distinction. Ranger Teresa Lutz, out.

The note at Whittaker farmstead

Same message, on a holotape in Boulder City
Add an image to this gallery
Retrieved from "https://fallout.fandom.com/wiki/Ranger_holodisk_message?oldid=3164579"
Community content is available under CC-BY-SA unless otherwise noted.