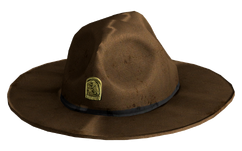 The Ranger hat is a hat in Fallout: New Vegas. In appearance, it is a khaki-colored campaign hat with the trademark badge of the New California Republic Rangers.

A campaign cover, also known as a "lemon squeezer" that is standard-issue to NCR patrol rangers. It is made of a stiff light khaki material and sports a polished brass ranger cap badge, worn together as part of a uniform alongside handmade combat armor.

A brown Ranger hat. It is bent and does not have the New California Republic insignia. It is worth 30 caps, unlike the ranger hat. Can be repaired with ranger hats and all cowboy hats.

A grey Ranger hat. Similar to the brown Ranger hat, but darker and with rings on the decorative band. Also worth 30 caps. Can also be repaired with Ranger hats and all cowboy hats.

A tan Ranger hat. Lighter than both the brown and grey Ranger hat. Worth 30 caps as well. Can also be repaired with Ranger hats and all cowboy hats.

With the Jury Rigging perk, this item can be repaired with an advanced radiation suit, all-purpose science suit, Followers lab coat, Roving trader outfit (not Roving traders hat), and possibly other high value or unique items. It can also be used to repair those same higher value items with this perk taken.

If a Ranger grey hat is put on Boone, the colors will be mixed up. [verified]

Some characters hair like Ranger Ghost's will clip through the hats. [verified]