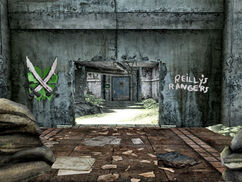 “Consider this place your home away from home. If you're ever in the neighborhood again, you're more than welcome to take shelter here.”— Reilly, after the player has helped her Rangers

The Ranger compound is a building in the Capital Wasteland. It acts as the headquarters of the mercenary company Reilly's Rangers in the year 2277.

The Ranger compound can be reached by entering Anacostia Crossing station at Anacostia Crossing (just north of Rivet City) and exiting at Seward Square (straight east, don't go down to the tracks). From the exit of the metro, head north past the Cornucopia grocery store and take the first alley to the east. Follow it around and, after it hooks north, take the east passage and it will be on one's left.

The compound is within a partially destroyed building and is guarded by a camera and a computer terminal. Once the player character meets Reilly or saves the Rangers in the quest Reilly's Rangers, interacting with the terminal unlocks the doors to the Ranger compound.

All of the items in the compound can be taken without incurring any negative Karma. If one turns left after entering the compound, and then goes straight ahead, they'll enter the bedroom/mess hall. There is a mattress on the floor on the right which can be used and the locker against the wall on the right is safe to store gear in.

All of the members of Reilly's Rangers whom the Lone Wanderer managed to save from the quest of the same name can be present in the Ranger compound afterwards:

A Dean's Electronics skill book can be found on the generator in the pantry. The book may have fallen off the generator and gotten stuck inside/underneath. A grenade may get it out.

The Ranger compound appears only in Fallout 3.

The Rangers embrace the old world's art as inspiration.

Copy of Dean's Electronics located in the pantry.

An aerial shot of the compound.
Add an image to this gallery

Retrieved from "https://fallout.fandom.com/wiki/Ranger_compound?oldid=2854744"
Community content is available under CC-BY-SA unless otherwise noted.