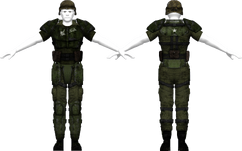 The Ranger battle armor and matching Ranger battle helmet are pieces of armor worn by members of the mercenary group Reilly's Rangers.

The Ranger battle armor is a variant of combat armor. The matching Ranger battle helmet is used only by the group's engineer Donovan. Each suit has the same serial number (41-90MPW) painted on the back, along with a US Army star.

Ranger battle armor is the strongest non-powered armor available in the game, and for player characters who value Agility over Strength, the Ranger armor is preferable to power armor. Some forms of power armor also carry an explicit -1 or -2 penalty to Agility, which lowers Sneak. Furthermore, unlike power armor, combat armor requires no special training to use.

The +5 Action Points boost, +1 Luck, and +10 Small Guns make this armor particularly useful for lower-level Small Guns player characters. It remains useful for anyone up to level 30, due to Damage Resistance level, modest weight, and ease of repair. 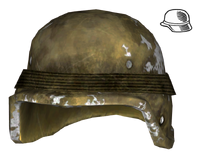 The back of the armor, with the star and 41-90MPW designation 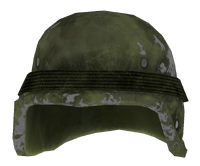 Unused texture; notice it matches the armor's color, unlike the used helmet 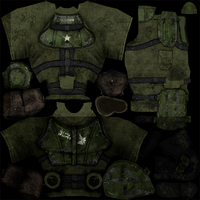