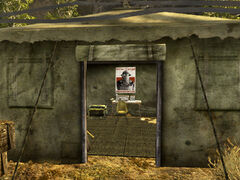 “This area isn't safe for civilians. You don't want to get caught by the Great Khans.”— Ranger Kudlow

Ranger Station Foxtrot is a location in the Mojave Wasteland in 2281. It is north of Red Rock Canyon and south of Vault 22.

Located directly north of the Red Rock Canyon, the station is nestled at the foot of a radio mast in a dead-end mountainous gulch. Although it is only accessible from Nevada State Route 157, it is used to monitor the activities of the Great Khans.[1] The small outpost itself is reasonably well-run, however, the remoteness and tedium around the camp have led to a higher than average scotch consumption rate evidenced by the number of scotch bottles littering the camp.[2]

The station can be found off of Nevada State Route 157, leading east from Jacobstown by following the dirt path splitting off directly in front of Silver Peak mine. Alternatively, if approaching from the Vegas area, taking the main highway northwest past the Horowitz farmstead and then left onto the state route heading southwest will lead to the station.

Cazador nests and untraversable cliffsides block any approaches from the east. The camp consists of one tent, several outdoor bedrolls, and a campfire. Outside the tent, there is a reloading bench on the right side, against one of the two large wooden crates.

Occasionally the skill book (Duck and Cover!) doesn't spawn. If this is the case, try reloading from a previous save or alternatively, exiting to the main menu (PC) or restarting the console before loading a save may cause it to spawn properly. It is also possible for two of the books to spawn at this location.[verified]